May have resolved a major problem in the field of immunotherapy 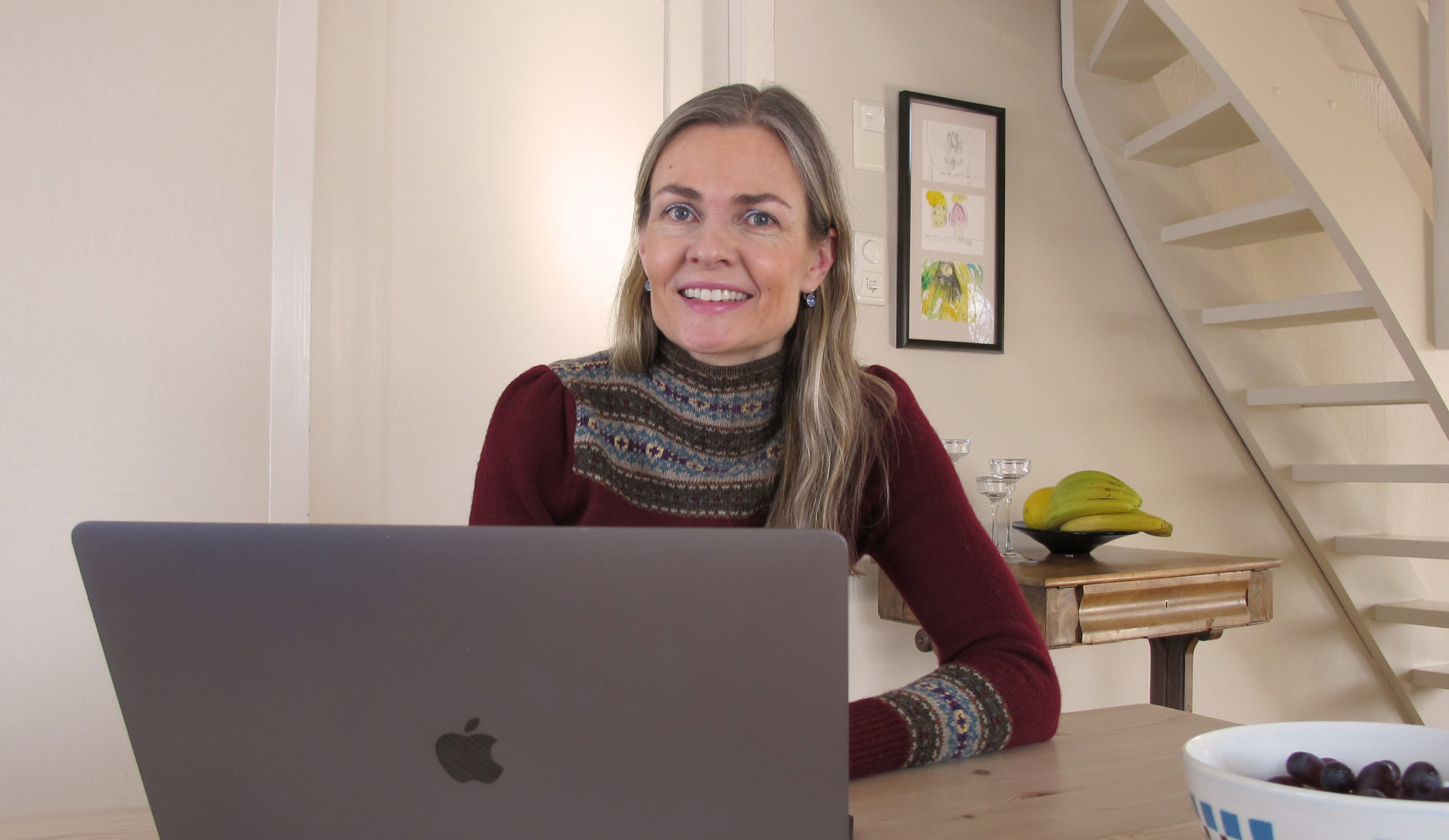 Johanna Olweus is professor and director of both the K.G. Jebsen Centre for Cancer Immunotherapy and the Department of Cancer Immunology at the Institute for Cancer Research at the Norwegian Radium Hospital. The hospital’s new clinic is being erected outside her office window. Inside the building she and her team of 16 outstanding researchers are seeking to resolve a major problem in the field of immunotherapy.

‘Immunotherapy is the most important development in cancer treatment over the past 10–15 years. Many patients do not benefit from such treatment, however, and the majority are not cured by immunotherapy,’ says Johanna Olweus from behind a large and seemingly untidy desk.

Appearances are not everything, however, and Olweus has full control of the documents on her desk. She and her team are doing a lot of innovative work, which is also reflected in a number of ongoing projects with Inven2. There is a lot of hard work going on in this office and the adjacent laboratory. Johanna is full of praise for her team.

‘They are an extremely capable lot,’ she says.

Olweus has recently been elected to the board of CIMT, the Association for Cancer Immunotherapy. CIMT is Europe’s leading association of researchers seeking to fight cancer through immunotherapy. According to Olweus, international collaboration is important for ensuring a high standard of research and innovation.

‘When we were awarded K.G. Jebsen status in 2013, we were granted permission by the Kristian Gerhard Jebsen Foundation to include an international partner, namely Ton Schumacher. He is one of the most world’s most sought-after researchers in the field of immunotherapy. Having him on the team meant that we could strengthen and develop our previous collaboration. According to Olweus, it is important for doctoral and post-doctoral students to gain insight into how research is conducted in other countries and to get an opportunity to work in the most excellent international laboratories.

The K.G. Jebsen Centre for Cancer Immunotherapy was one of few centres that was granted further funding by the foundation, and 2019 is the final year of funding.

Affects the body’s own immune system

Immunotherapy can most easily be explained as getting the body’s own immune system to identify and kill off cancer cells. Cancer cells can take on characteristics that enable them to go undetected by the body’s immune system. Cancer can thus spread without being detected.

‘CAR-T is a more advanced treatment than checkpoint inhibitors. It involves genetic modification of T cells outside the patient’s body. The T cells are modified with an antibody that recognises a specific protein on the surface of, for example, the B cells in the immune system. In this way, CAR-T can kill some types of cancer, including leukaemia, in some adults and children,’ says Olweus.

Unlike checkpoint inhibitors, CAR-T can cure approximately 40 per cent of patients suffering from B cell leukaemia and B cell lymphoma. There was previously no hope for these patients.

However, CAR-T has clear limitations in relation to types of cancer that do not originate from B cells.

‘CAR-T bonds with a surface protein on the B cell membrane. However, in its present form, the treatment does not distinguish between healthy cells and cancerous cells, but kills all B cells,’ says Olweus.

That is not a problem, since we can get by without B cells. It is however a problem in relation to certain organs in the body.

‘There is a general need to be able to recognise other specific proteins in cancer cells and ideally also on the inside of the cells, since that is where most specific proteins are found. This will open up many more possibilities and will resolve a major problem in immunotherapy,’ says Olweus.

And no sooner said than possibly done.

Utilise a principle from transplant operations

Olweus and her team are addressing this problem of proteins that have to be reached on the inside of the cells by using a principle taken from organ transplants.

‘In connection with organ transplants, for example of a kidney, there are usually differences in tissue type between the donor and the recipient. This may not be a problem while the patient is taking immunosuppressants. But if the medication is stopped, the organ will quickly be rejected. In patients in whom an organ is transplanted that already has cancer, the cancer in that organ may also be rejected if immunosuppressants are no longer administered,’ explains Olweus.

This rejection mechanism is due to the immune system in the organ recipient recognising the normal proteins when they are presented in the context of foreign tissue type molecules on the transplanted cells, and responding by initiating a vigorous immunologically conditioned rejection.

‘It is this rejection mechanism we utilise to create new T cell receptors (TCR) to develop an immunotherapy that we hope will produce results in patients who are currently left with little hope of recovery,’ says Olweus.

One of the advantages of using T cell receptors instead of antibodies as in CAR-T treatment, is that T cell receptors are capable of recognising proteins both on the surface and inside the cells.

‘This opens up entirely new possibilities for steering T cells towards their targets because we get many times as many targets to choose between,’ says Olweus.

The technology developed by Olweus and her team is known as platform technology, and will be able to generate a series of new T cell receptors on the basis of that same principle. The technology has been patented, and the work on patenting and commercialisation has been carried out in collaboration with Inven2.

The researchers have now identified a number of T cell receptors that should be effective in the treatment of various forms of cancer. So far, the focus has been on some types of blood cancer for which there is currently no cure, in addition to some types of solid tumours.

Great confidence in the technology

The researchers have completed several pre-clinical trials on cells and test animals, with promising results. It remains to be seen, however, whether the principle will be equally effective in humans.

‘It is really exciting to work with Johanna Olweus and her team. We are working on many of the spin-off projects from their research and are now looking at the possibility of establishing a company to commercialise the TCR technology they have developed. We have a lot of confidence in this project and we look forward to the work of setting up a company,’ says Are Klevan.

Klevan works as a project manager in Inven2, and has teamed up with business developer Kristin Sandereid on this particular project.

In need of infrastructure

Olweus is of the opinion that, while there are many good immunotherapy communities at Oslo University Hospital, the infrastructure is clearly lacking.

‘If we are to keep abreast internationally, we must invest in infrastructure. We want to see a national immunogenic therapy centre being established, based in Oslo. This is a field in which therapeutic development is currently expensive and requires advanced equipment, but, looking forward, prices are expected to drop considerably, as they have done in the case of genetic sequencing,’ says Olweus.

She dreams of establishing infrastructure of the kind that they have at the leading US universities and hospitals University of Pennsylvania and Memorial Sloan Kettering, which lead the field globally in the development of new cancer treatments.

‘Here, they have in-house access to everything, which makes an enormous difference. We currently have to wait a long time for technologies we need to work on things like virus production and transduction. We need to get this in place, or the opportunity will be lost,’ says Olweus.

She is very grateful for the support and contributions received from the Research Council of Norway, Norwegian Cancer Society, South-Eastern Norway Regional Health Authority and Inven2, and she praises their willingness to invest in risky innovation projects like those that she and her team have been working on in recent years.

Olweus has led the work behind the research team’s publications in Science and the open-access journals at SpringerNature.com, whereby the research has been demonstrated to hold a high standard internationally.

And this has not gone unnoticed.

Olweus herself has started a prestigious collaboration with Kite Pharma/Gilead, one of the world’s leading companies in the development of immunotherapy. Olweus points out, however, that Oslo has several other skilled communities in the field of immunotherapy that have produced results of a high international standard.

‘One good example is the work of Professor Kalle Malmberg, team leader at the Department of Cancer Immunology, who has just returned to the Institute for Cancer Research at the Norwegian Radium Hospital after spending a year at UC San Diego. Kalle has established extensive collaboration with Fate Therapeutics, a world leader in biopharmaceuticals for cellular therapy, based in the USA. This illustrates that we are capable of making an international impact,’ concludes Olweus.