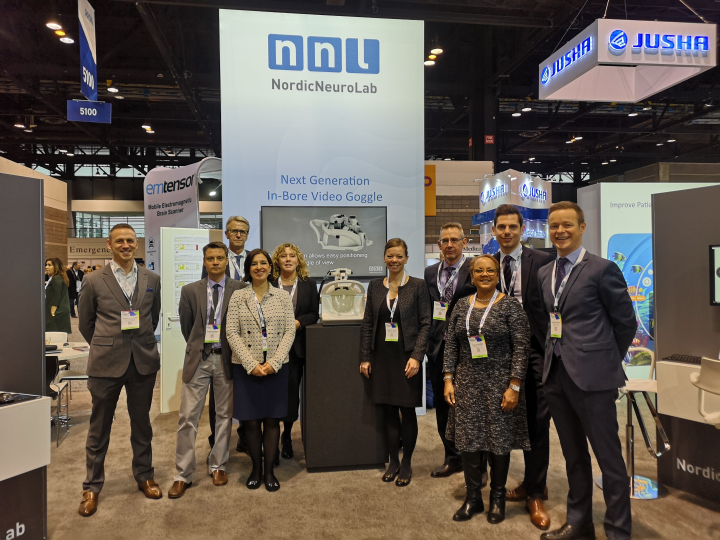 For years, researchers at Oslo University Hospital and Akershus University Hospital have collaborated closely with the company NordicNeuroLab in Bergen to arrive at, develop and commercialise new and better diagnostic imaging methods. This has now resulted in a new product for advanced MR diagnostics that enables more targeted cancer treatment.

The licence made it possible for NordicNeuroLab to develop a product for more advanced diagnostic MRI of cancerous tumours, which has already been launched on the international market. It can help oncologists to administer better and more targeted treatment, and monitor the effect of the treatment in a way that has not previously been possible.

‘It is particularly interesting to see physicists and clinicians working so closely together academically, and thereby contributing to an outcome that can be used by doctors in the treatment of patients in hospitals,’ says Elin Melby. She is technology strategy manager in Inven2 and, along with colleague Kristin Sandereid, she has followed the projects closely for a number of years. Sandereid is responsible for the agreements with NordicNeuroLab.

‘The collaboration that has been established with NordicNeuroLab over the course of all these years is a fantastic example of a win-win relationship. The whole value chain, with Norwegian research, Norwegian clinicians and Norwegian industry, collaborates and creates results that lead to better products that are sold globally,’ says Sandereid.

Kjell-Inge Gjesdal works at Akershus University Hospital and played a central role in the development of the new method of analysing MR images, for which NordicNeuroLab has bought the licence.

‘We have developed an imaging technique for evaluating cellular changes, regardless of whether they are benign or malignant, and then analysing the data. The technique is called “split-dynamics MRI” and has unique properties in that it provides an accurate image of the cancerous tumour at the same time as it reveals the condition of the cancer cells by means of a number of biomarkers,’ Gjesdal explains, and he continues:

‘Patients to be diagnosed are injected with a contrast agent before the MR scan is carried out. On completion of the split-dynamics MRI we have two parallel image series – one consisting of many low-definition images and one consisting of high-definition images. The low-definition series lacks detail, but reflects the signal changes that take place inside the cancerous tumour when the contrast agent flows through it. The human eye or brain is unable to perceive such changes as they are very small and occur very rapidly,’ says Gjesdal.

This MRI method generates enormous amounts of data, and Gjesdal and Grøvig, one of his doctoral students, realised that they needed special software to analyse the data.

That was when Atle Bjørnerud was drawn into the project. He has collaborated with NordicNeuroLab for a number of years and is a software development wizard.

‘I started working with NordicNeuroLab back in 2003, and I played a central role in developing the software marketed by NordicNeuroLab under the name nordicICE. Over the years, I have spent a lot of time on further developing that software,’ says Atle Bjørnerud. NordicNeuroLab has launched several products on the market based on previous licences with Inven2 and Bjørnerud’s work.

Bjørnerud is a physicist and in his day-to-day work he leads a research team in diagnostic imaging at Oslo University Hospital in addition to being part of the ImTech Centre.

Funding from South-Eastern Norway Regional Health Authority made it possible to hire Bjørnerud to write the software code that has now been licensed by NordicNeuroLab.

CEO Thomas Lie Omdahl of NordicNeuroLab is enthusiastic about the new licence.

‘This looks very exciting. We are in the process of implementing the new software in nordicICE in order to test it prior to commercialisation. We are giving research teams with whom we collaborate the possibility to test the new application. They publish in scientific journals and, if the results live up to our expectations, it will be commercially available for use with our hardware and offered to Siemens and GE within two years,’ says Lie Omdahl.

NordicNeuroLab was established in 2001 based on research from Haukeland University Hospital, and currently has 45 employees in Bergen, USA and Europe.

NordicNeuroLab has traditionally supplied diagnostic brain imaging services and been a leading supplier in that niche; they are now looking at cancer as an important target area for the future. This new product under the licence agreement with Inven2 is very well suited to the new target area.

Invaluable help and support from Inven2

Lie Omdahl, Bjørnerud and Gjesdal all commend the collaboration they enjoy with Inven2 and each other.

‘We have drawn on the invaluable help and support of Inven2 in this project,’ says Gjesdal, and Lie Omdahl supports this view:

‘We have benefited from excellent collaboration with Inven2 and Atle Bjørnerud for many years. We are now witnessing more extensive use of nordicICE, not just on the brain, but also for prostate and breast imaging, and we look forward to extending our business in that direction in the time ahead.’

‘Dialogue and negotiation of contracts that are mutually beneficial to all parties are important. We dare to go ahead because the initial costs are not too high, making commercialisation more effective and attractive,’ says Lie Omdahl.

Working with hospitals in Seoul

Lie Omdahl reports that many of the hospitals in Seoul are already using products from NordicNeuroLab, and that the research teams there are quick to adopt new technology.

‘They have many patients in South Korea, so new technology can be validated quickly, which makes collaboration with South Korean researchers very attractive,’ says Lie Omdahl.

The product was launched on the market in December.